The Poli Mitt was introduced to rave reviews in late 2013 after being thoroughly vetted by hundreds of professional detailers.  Compared to the previous applicator it holds more poliglow, is easier to work with than the applicator it replaces and makes application quicker!  This applicator also has replaced the previous version that was included in the Complete Poli-Glow Kits!

Life just got a whole lot easier...
"Not only can we make our old fiberglass shine like new, we can now apply it easier, with less effort, and in about half the time thanks to the "MITT"..."
Sometime during 2013 thoughts turned towards the idea of a new applicator that would further improve the results achieved by the formed 7" chamois type Poli Glow Applicator (already the industries' best).  The goal became to produce an applicator that would be easier to handle than the previous design, it had to negotiate curves surfaces easily, hold at least twice the amount of Poli Glow, minimize the potential for overlaps and brush strokes, and not need to be set down every time there was a run or imperfection while applying.
Prototypes were created and these MITT's were put in the hands of over 100 professional detailers for a thorough vetting.  Results came in, and were striking...
More than 95% preferred the new "MITT" 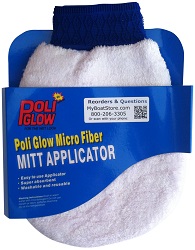 In Summary, this new "MITT" applicator:
Back to Poli Glow
Use left/right arrows to navigate the slideshow or swipe left/right if using a mobile device